How to Start a Home Health Care Agency: What is Medicare?

How to Start a Home Health Care Agency: For those seeking to start their own home health care agency, education is a crucial factor in attaining a successful outcome. A well-trained staff not only contributes to a higher quality of patient care, but also contributes to the profitability of the agency and long-term success.

Potential new agency founders should be knowledgeable in both the clinical aspects of the home health industry, as well as the financial side of it.

Medicare is a vital component of the home health and hospice care delivery system. While most of our readers are very knowledgeable on the program, we would like to share some information for those who are less familiar with its inner workings, or simply would like to know more.

Recently, the Kaiser Family Foundation published an in-depth look at the program and what we might expect to see in the future- valuable knowledge for those already working in the home health industry or for those who are interested in potentially starting their own business.

Medicare at a glance

Medicare is the federal health insurance program created in 1965 for all people ages 65 and older, regardless of income or medical history, and expanded in 1972 to cover people under age 65 with permanent disabilities.  Now covering 54 million Americans, Medicare plays a vital role in providing financial security to older people and those with disabilities.  Medicare spending accounted for 14% of total federal spending in 2013 and 20% of national personal health spending in 2012.

Medicare has undergone numerous changes since its inception.  Most recently, the Affordable Care Act of 2010 (ACA) contained a number of provisions affecting Medicare, including benefit improvements, spending reductions affecting providers and Medicare Advantage plans, delivery system reforms, premium increases for higher-income beneficiaries, and a payroll tax on earnings for higher-income people.  These changes are being phased in over time.

Characteristics of People on Medicare

Medicare covers a diverse population (Exhibit 1).  In 2013, half of all people on Medicare had incomes below $23,500 per person.  In 2010 (the most recent year of data available), more than one quarter of all beneficiaries reported being in fair or poor health, and three in ten had a cognitive or mental impairment.  Nearly 9 million beneficiaries (16%) are nonelderly people with disabilities and a growing share (13% in 2010) are age 85 or older.  Two million beneficiaries (5%) lived in a long-term care facility in 2010. 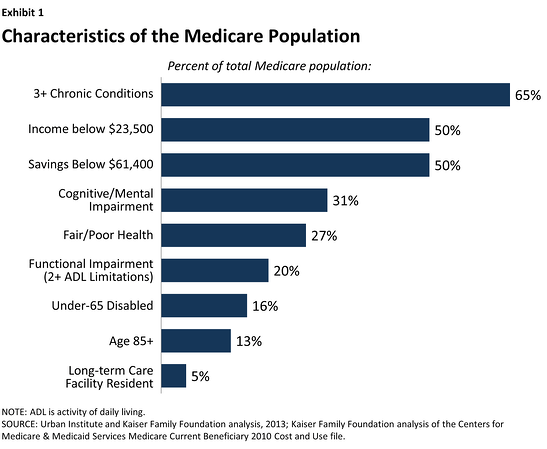 The Structure of Medicare

Medicare benefits are organized and paid for in different ways (Exhibit 2): 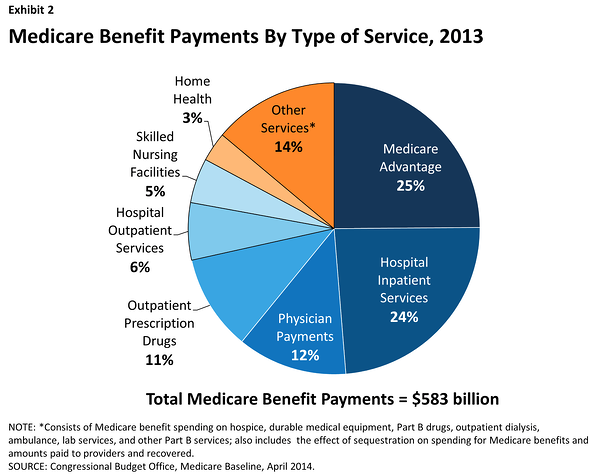 Medicare provides protection against the costs of many health care services, but traditional Medicare has relatively high deductibles and cost-sharing requirements and places no limit on beneficiaries’ out-of-pocket spending.  Moreover, Medicare does not pay for some services vital to older people and those with disabilities, including long-term services and supports, dental services, eyeglasses, or hearing aids.  Beneficiaries enrolled in Part D plans also may be subject to higher drug costs in the drug benefit’s coverage gap (also called the “doughnut hole”); in 2014, beneficiaries with prescription drug spending exceeding $2,850 are responsible for 47.5% of the cost for covered brand-name drugs and 72% of the cost of generics until they reach the catastrophic coverage limit ($4,550 in out-of-pocket costs in 2014).  However, the coverage gap is gradually closing by 2020, when beneficiaries will pay no more than 25% of the cost of their drugs in the coverage gap.

In light of Medicare’s benefit gaps and cost-sharing requirements, most beneficiaries covered under traditional Medicare have some form of supplemental coverage to help cover cost-sharing expenses required for Medicare-covered services:

Medicare Spending Now and In the Future

Medicare spending is affected by a number of factors, including the number of beneficiaries, how care is delivered, the use of services, and health care prices.  Both in the aggregate and on a per capita basis, Medicare spending growth has slowed in recent years and is expected to grow at a slower rate in the future than in the past—and even slower than was projected just a few years ago.  Based on a comparison of CBO’s August 2010 and April 2014 baselines, Medicare spending in 2014 will be about $1,000 lower per person than was expected in 2010, soon after passage of the ACA.

Looking ahead, Medicare spending (net of income from premiums and other offsetting receipts) is projected to grow from $512 billion in 2014 to $858 billion in 2024.  These estimates do not take into account additional spending that is likely to occur to avoid reductions in physician fees scheduled under current law.  On a per person basis, Medicare spending is projected to grow at 4.0% annually between 2013 and 2022 (factoring in the projected cost of physician payment updates).  This growth rate is projected to be slower than private health insurance spending on a per person basis over the same time period, and somewhat faster than growth in the economy, as measured by GDP per capita (Exhibit 5). 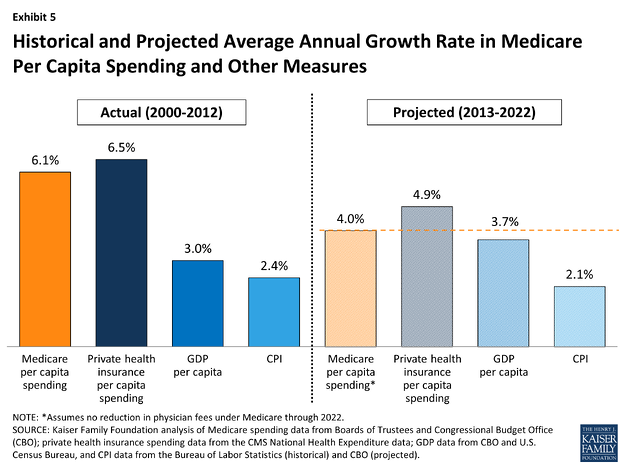 The Affordable Care Act directed the Centers for Medicare and Medicaid Services (CMS) to test and implement new approaches for Medicare to pay doctors, hospitals, and other providers and to bring about changes in how providers organize and deliver care.  These new approaches typically include financial incentives that are designed to encourage collaboration and care coordination among different providers (such as hospitals and doctors), reduce spending on unnecessary services, and reward providers for providing higher quality patient care.  Accountable Care Organizations (ACOs) are one example of a delivery system reform model currently being tested within Medicare.  The ACO model allows groups of providers to accept responsibility for the overall care of Medicare beneficiaries and share in financial savings if spending and care quality targets are met.  Other new models being tested include various payment approaches for so-called “medical homes” and initiatives aimed to reduce hospital readmissions.  These models are being evaluated to determine their effect on Medicare spending and the quality of care provided to beneficiaries.

Looking to the Future

Medicare faces a number of critical issues and challenges, perhaps none greater than providing affordable, quality care to an aging population while keeping the program financially secure for future generations.  The ACA included numerous changes designed to improve Medicare benefits, slow the growth in Medicare spending, and improve the quality and delivery of care.  Further changes to Medicare could be considered as part of broader efforts to reduce the federal debt and to curtail reductions in Medicare’s physician fee schedule which are called for in the coming years.  And yet, in recent years Medicare spending has grown at a much slower rate compared to historical spending growth, which may ease the pressure for significant changes to the program in the near term and give policymakers an opportunity for thoughtful consideration of ways to bolster the program for an aging population over the longer term.  As policymakers consider possible changes to Medicare, it will be important to monitor not only the effect of these changes on total health care expenditures, including Medicare spending, but also the impact on beneficiaries’ access to quality care and their out-of-pocket costs.