Home Health Management- The Journal of the American Medical Association has recently published a report comparing the use of hospice services vs. non-hospice patients. The hospice movement has become increasingly popular for patients who wish to remain in a homelike setting, rather than staying home and having frequent medical facility admissions. The study found that admission to hospice facilities proved to result in fewer invasive procedures, as well as less spending overall compared to those who did not utilize hospice facilities. According to the report’s introduction, “patients with cancer, the single largest group of hospice users,have both the highest rates of hospice enrollment and the highest rates of hospice stays less than 3 days.”

While the report found that hospice and non-hospice patients with poor-prognonsis cancers had evenly matched levels of spending, the hospice patients spent 12% less in their final year. Additionally, hospice patients received fewer hospital admissions, less time in intensive care, and were more likely to die at home rather than a hospice facility.

The report took 86,000 patients into account when researching poor-prognosis cases for the study. More specifically, 18,165 hospice patients and 18,165 non-hospice patients with similar demographics were compared side by side.

The results of this study could be considered a good talking point when explaining the benefits of admission to a hospice facility due to the fact that the research indicates those in hospice care truly do receive a life with less medical interruptions and less financial strain on loved ones during the end stages of their diseases.

According to the Report:

This accounts for the increased spending in the non-hospice patients’ final year, according to the report.

“Table 1 (below) shows baseline characteristics of the matched cohort. There were no statistically significant differences between patients in the hospice vs nonhospice groups for age, sex, region, time from poor-prognosis diagnosis to death, comorbidity before poor-prognosis diagnosis, or daily cost in the year before hospice enrollment. Solid tumors accounted for the majority of diagnoses in both groups (91% hospice, 88% nonhospice). More hospice beneficiaries were white and lived in higher-income zip codes. Median hospice duration was 11 days; less than 6% of stays exceeded 6 months. Hospice and nonhospice beneficiaries had similar comorbidity before poor-prognosis diagnosis but higher comorbidity between diagnosis and hospice enrollment; illness duration from diagnosis to death, however, was the same for both groups (7 months).” (jama.com) 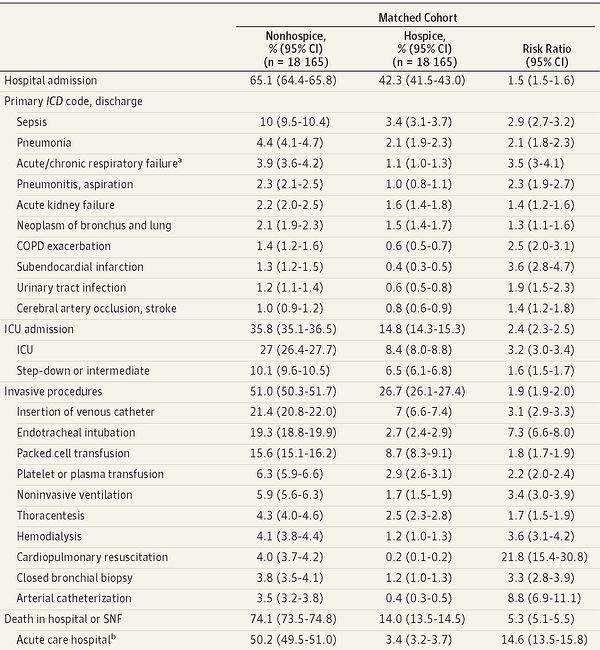 The full report can be found here